by Dieter Rohmann (as originally published in Germany in Report Psychologie, 5-6/2000) translated by Jacqueline Trewin

The category, „Religious or Spiritual Problem“ can be found in the DSM-IV: V62.89 (Z71.8) under „Additional Conditions that May Be a Focus of Clinical Attention“ with the following short description: „This category can be used when the focus of clinical attention is a religious or spiritual problem. Examples include distressing experiences that involve loss or questioning of faith, problems associated with conversion to a new faith, or questioning of spiritual values that may not necessarily be related to an organized church or religious institution“.
Normally the „loss or the questioning of faith“ correlate with the withdrawal from a religious community, such as an alleged sect, a new religious movement, a totalitarian group or a cult. In the following, it will be shown how an effective, short individual therapy consultation (5-20 sessions) with ex-cult/cult members could result in practice.

There are various ways of leaving an alleged sect or a cult:

Nevertheless, every one of these ways of leaving a cult is connected with characteristic problems and symptoms which vary from person to person and among other things, are dependent on the duration of membership and the position of the cult member. The following symptoms (Giambalvo, 1993) are, as a rule, immediately connected with leaving a cult, and therefore also primarily considered the focus of attention:
Depression, sense of purposelessness, guilt, anger, alienation, isolation, distrust, fear of going crazy, tendency to think in terms of black and white, inability to make decisions, low self-esteem, embarrassment, dissociation, floating, nightmares, inability to concentrate, family and dependency issues, etc.

The general condition after leaving a cult can be viewed as being a critical life event, a crisis which can be clearly described with the following words: No more – not yet.
In order to provide an adequate form of assistance to the ex-cult/cult member, the following three steps (see diagram) should be conducted in sequence after the formation of a thorough anamnesis and diagnosis*.

Step I
predominately concerns itself with the background information of the respective movement, such as the cult ideology, the cult hierarchy and the everyday life of the cult, including the exchange of spiritual, religious, philosophical, but also political themes, etc.
It is necessary for the counselors to determine which cult category he/she is associated with (Christian-Fundamentalistic Group, Guru Movement, Psychocult or Esoteric Movement). Furthermore, he/she should acquire relevant knowledge about the specific cult and ist obligatory religious/spiritual orientation. He/she should learn to understand the absolute binding valuesystem of the corresponding cult and what it actually represents. In addition the counselor should investigate what the cult defines as being desirable or undesirable conduct, and how the ideology/doctrine sanctions deviant behaviour. Hence, the concept of social desirability also plays a role particularly as there are absolute obligatory standards of good behaviour or positive attributes. Most cults argue in the frame of absolute and dichotomous thinking in the sense of `either-or´, `black-white´ , `good-angry´, `inside-outside´. The colours of the rainbow between black and white can eventually become unnoticed as nuances and shading encounter find no more space. Hence, it is of particular importance to be informed of which personal negative consequences (according to the prophecies of the cult) follow after the withdrawal from a cult. As a consequence, this extreme cognitive disposition of the cult member can eventually emerge itself as an alleged phobia, causing a fear of leaving the cult. Nevertheless, the above symptoms in varying form and intensity can be observed should the event of leaving the cult transpire.

In Step II
the `Theory of Mind Control´ according to Lifton (1963) should be explained and further detail into various theories of social-psychology and perceptional psychology should be included. In addition, these theories should be applied to the relevant cult. Of particular significance are for example, the `Theories of Conformity´after Asch (1956), the `Locus of Control´ (Rotter, 1966), the `Attribution Theories´ (Weiner, 1974), the `Cognitive Dissonance´ (Festinger et al., 1956), the `Forced Compliance´ (Festinger & Carlsmith, 1959), the `Helplesness´ (Seligman, 1975), `Obedience toAuthority´ (Milgram, 1974), the `Deindividuation´ (Zimbardo, 1969), the `Self-Fulfilling-Prophecy´ (Merton, 1948) and the `Selective Attention´ (Hernandez-Peon, 1966).
The explanation and portrayal of these theories assist in helping the client to become aware – independent of the respective context – of the extent to which we all decide, perceive, become deceived or manipulated or allow ourselves to become deceived or manipulated. During the sessions of Step II, it will be, on one side, comprehensible to the clients that under certain conditions it is possible for almost everyone to comply with the promises made by cults. And on the other side, that it is extremely difficult to recognise or penetrate the indoctrination mechanisms. At this stage, his/her role and own engagement in the cult will be once again painfully aware.
Both of these steps contribute towards understanding, explaining and overcoming cult experiences. The symptoms and problems of the above mentioned, which are immediately connected with leaving a cult can here, as a rule, be fully dealt with and overcome.

In Step III,
the motives and predisposing factors which could have been responsible for the confluence of the respective cult, shall be analysed. At the latest, by this stage, the client would like to understand why especially he/she took this path and why it was not possible to say `No´ earlier and then simply leave.
Step III is about thematic topics which were significant to the clients before they had joined the cult. These thematic topics include earlier hurtings, experiences of loss, fear, family issues, partnership, friendships, emotions, loneliness, sexuality, communication, frustration, self-worth, feelings of alienation, insecurity, foresight, dependency, autonomy, attitudes, expectations, etc.

This step could be introduced by following questions:

Step III is therefore of special relevance because in the psychotherapeutic setting it became increasingly clear that further to the problems which an exit immediately accompanies, the burdening thematic complexes of the pre-cult phase, become relevant again. It has been continuously shown in practice that these problem areas during the cult membership were merely `put on the shelf´and eventually became especially relevant again after leaving.

In the past, former cult members (between 1 and 8 years after their exit) have repeatedly requested advice from me. All of these ex-members applied for help imediately after they had left the cult. Most of them consulted clergy (Weltanschauungsbeauftragte), cult information and counseling centers, psychologists or reported to have stayed in a psychiatric clinic. Astonishingly, despite the receivership of professional help, the ex-members had not overcome their cult experiences, even after many years. Further, they still claimed to have had different disorders which correlated with their former membership and exiting the cult.

A possible explanation for this could be that the work of clergies and conventional counseling centers with cult or ex-cult members is limited to the content of Step I and possibly parts of Step II. Furthermore, in a psychotherapeutic setting, Step III and possibly parts of Step II are mainly used. There are grounds for the assumption that the handling of individual steps in isolation immediately after leaving a cult is actually helpful. However, for the ex-members to overcome their experiences on a permanent, long-term basis, the isolated technique of using these three steps is seemingly insufficient. In relation to my experience, the client is only creating the willingness to become intensively involved in Step III if he/she has consecutively ompleted and also understood Steps I and II. Further, the client can only accomplish self-forgiveness and develop a sense of self-acceptance throughout the rest of his/her life, through the completion of Step III. In a metaphorical sense, the client should neither be the giant of his/her dreams, nor the dwarf of his/her fears.

The evaluative experience of this model is exclusively based upon reports of numerous clients and behavioural observations. At present there is unfortunately still no empirical proof for the effectiveness of the Three-Step-Model in the work with ex-cult/cult members. But the control of the therapy-progress has been shown in the past to be extremely encouraging.

Summary
An adequate style of practice in psychotherapeutic work with ex-cult/cult members shall be represented by the Three-Step-Model. The symptoms which are immediately associated with leaving a cult – compared with the tip of an iceberg – can essentially be dealt with by using Steps I and II. The larger, invisible part of the iceberg which is situated under the surface can be dealt with within Step III, but only following the completion of Steps I and II.
Years of testing this attempt in intervention has shown that only when these three steps have been completed, the client is potentially capable of understanding, overcoming and integrating his/her cult experience, in order to finally reach self-acceptance. 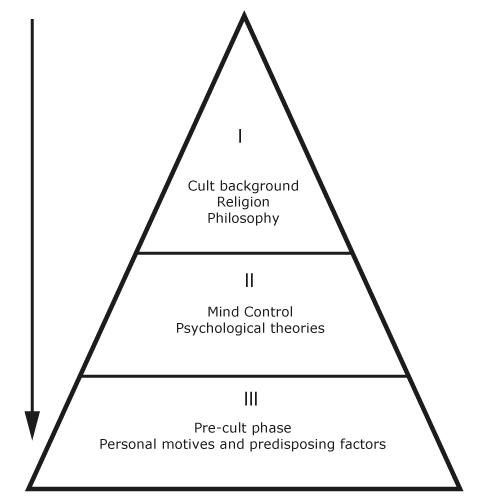 Diagram of the Three-Step-Model by Dieter Rohmann